It was over 20 years ago but I remember the feeling vividly to this day. As a 28 year old high school drop out who prided himself on his work ethic I was on the top of the world.

After 4 years of hard work I had been given a large promotion at one of the fastest growing financial services companies in Canada. I managed a portfolio of over $10 million in investment funds and now had been given responsibility for launching and expanding the company into a new province. Tasked with tending to the growth of the organization in a large, untapped market was everything I had ever dreamed of.

Or at least it should have been.

I mean I had more income coming in than ever in my life and honestly more than I could have imagined.  This coupled with a brand new, canary yellow Porsche in my parking stall that took me to my highrise downtown office everyday and this was a life I could scarcely believe had come true for myself.

I was 1000km from home. A new face in a new town. The woman of my dreams agreed to come with me and build a life together. With a new downtown apartment loft, the fancy car and the autonomy to setup the company as I saw fit, I could not have scripted a more perfect life.

That is of course until it became apparent that I had not.

It was October 3, 1997. I was sitting at my desk, making calls, working on making some connections in this new city I was in. That was when I got the call. The call that would lead to me losing millions of dollars of my friends, family and clients money.

Cue the self talk…

I’m a fraud.
I’m a failure.
I should have known better.
What kind of man of any integrity lets this kind of thing happen?
This is not the kind of man I am.
I am a provider, a leader, a man with passion, drive, and integrity.

Yet still, there I was.

The stories that started playing in my head were plentiful. The shame was immense.

So let’s talk a little bit about the stories we tell ourselves and how they shape how we show up in this world. Whether we want to acknowledge it or not we all have a tape playing in our head for any given circumstance. The tape we play, or the stories we tell, can have a profound impact on how we feel.

Let’s have a look at a couple of examples that, if you are a father, you may be able to relate to.

The sun is shining outside and they are in a playful mood. The boys inform you that they are going out into the front to play some road hockey on the driveway. You smile in contentment and turn your attention back to cleaning up the aftermath of spilled soup and bread crumbs off the floor. The cleaning task on autopilot while you imagine how much fun it’s going to be to go outside and kick their little butts in a game of pickup on the driveway. The cleaning is taking a little longer than you wanted, yet you decide to vacuum and finish the job properly.

Twenty minutes behind the kids you throw on your shoes and head out the garage door eager to show the kids how it’s done. Only problem is when you get out there they are not there. Not on your driveway. The net is there, sticks strewn on the ground, ball in the net. You walk to the end of the driveway looking up and down the street. No sign of the kids anywhere.

This is when those stories kick in. In this case there are a few different versions of the tape that might be playing in your mind.

Like most parents likely the first story has something to do with some kind of calamity. Some sort of untoward outcome that has happened. Your mind starts racing playing through scenarios in the blink of an eye. Has there been reports of suspicious individuals in the neighborhood recently? What if someone had driven by and lured the kids into their vehicle? Surely this is a reasonable possibility with the type of world we live in. I mean how many times have you heard similar stories? Now imagine this scenario playing through your mind. What kind of emotion does that evoke? Fear? Anxiety? Panic?

Keeping in mind that at this point you have absolutely no idea what has actually transpired. None of this is real except it is the story that we run through our heads.

Now imagine with me scenario #2 that might run through your head. Maybe the kids had wandered off down the road to the park a few blocks down. Hadn’t you told them several times not to do that? Hadn’t you told them forty two thousand times not to leave the yard without letting you or their mom know? How many times will it take before you get through their thick skulls that simply disappearing is not OK?

What kind of feeling does that kind of story conjure up? Anger? Sadness? Disappointment?

Now consider a third possible explanation playing out in your mind. Their mother, your wife, came home early. She took them and walked them the half block to the green space filled with wildflowers at the end of the cul de sac. They are currently picking you a small bouquet of flowers for your birthday tomorrow. Mom wanted to surprise you and would only be gone for a few minutes so didn’t tell you.

That kind of story surely brings up a substantially different emotion doesn’t it?

What about a scenario where your partner is unexpectedly late coming home from work? What narrative do you start to create for that and how do the different possible narratives impact how we feel? Consider these variants of story:

These may all be plausible stories, yet each one is going to have a significant impact on your behaviour when your partner does eventually get home.

For me the stories that swirled around the collapse of one of Canada’s largest Ponzi schemes were internal. They started becoming stories that questioned who I was. Stories that started to cast doubt around whether or not I truly was the man I thought I was and whether I could ever become the type of man I wanted to be.

I had worked hard for 4 years helping to build a business that ultimately turned out to be a complete sham. I had contributed to the ruin of the financial future of many friends, family and clients. This kind of failure surely had the possibility of negatively impacting my self perception if I continued to let those stories percolate and expand.

What is interesting to note is the difference between the scenarios I described above. The story options we choose with respect to the kids playing in the driveway or our partner being late are all about right now. They are moment in time and likely determine what immediate course of action we take to remedy the situation.

The other scenario, the massive business failure, did not have any possible immediate solution yet the story I continued to weave had the possibility to shape me for a lifetime. One is impactful in the moment and the other has the potential to be impactful over a lifetime. What becomes critically important is to at least become aware of the stories that we tell ourselves. To become aware of the impact that those stories might have not only on our immediate behavior but also on our long term well being.

Imagine the potential harm created by a lifetime of stories of unworthiness every time we experience a failure? The compound effect of continuing to allow the stories of

I should have known better.

What kind of man of any integrity lets this kind of thing happen?”

to play out in my head could be catastrophic. These subtle little undertones or stories we have can start to play on autopilot. The stories become triggered by a variety of events. They can be insidious but it is important to be vigilant for them and recognize when that inner dialogue appears. I understand you may not be able to prevent the stories from starting but you certainly have the opportunity to keep them in check and ensure that they do not create any long term damage.

What are some of the stories that you are currently telling yourself?

Mike Cameron is the author of “Becoming a Better Man: When “Something’s Gotta Change”, Maybe It’s You!”

“A powerful, raw story that is somehow both unique and relatable. Becoming A Better Man shows us how to close the gap between the men we wish to be and how we are actually behaving. It’s a courageous look at the doubts and fears we’ve learned not to talk about, and a reminder that together we can create a stronger, healthier understanding of what ‘manhood’ really means.” 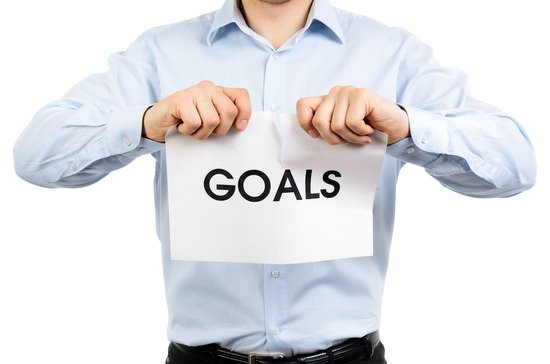 Share I have officially quit!  That’s it, I’ve had enough.  I hereby decree that I will no longer set goals for myself. For as long…

You have already reported this