**NOTE: I wrote this immediately after completing this project but was not able to publish it until the exhibit was public.**

I used profanity that I have heard countless times in my teens and twenties as ‘locker room’ talk. Today I used those words directed to a woman that did not ask to be spoken to, nor did she deserve to be treated with disrespect. 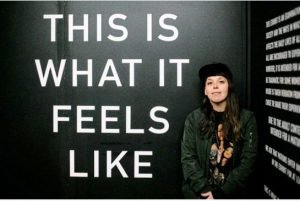 Today I volunteered to be a voice actor for a project called “This is What it Feels Like”. The mission of “This is What It Feels Like” is to provide participants with the auditory experience of being on the receiving end of ‘street harassment.’ The objective is to promote understanding and stop the misogynistic patterns that have become embedded in our culture.

I knew that this would be a challenging project to be a part of. I knew that having to spew crude, derisive jeers even into a microphone for a good cause would be difficult. What I didn’t expect was the entirely visceral reaction my body would have to the experience. Driving to the recording studio I felt as if I was on my way to deal with a major confrontation. Similar to how I might feel driving to work knowing I had to fire an employee or I had to face a difficult conversation with a client or supplier. My body was tense, my stomach in knots. Why would I react this way? This was, after all, all make believe. Or was it? Maybe that is the kicker. Maybe it was not so much the fact that I had to say these words but rather the fact that I had to acknowledge that these kind of hurtful damaging words were strewn like confetti at a wedding every single day.

I was the last male to go into the recording studio and after listening to the men ahead of me vomit obscenities into the microphone my gut tightened, the hairs on the back of my neck rising. I could feel my body tense as I moved closer and closer to taking my turn at the microphone. Emotionally I vacillated between being relieved at how difficult this was for me and disgusted with how easy it is for others. As I sit here now reflecting on the experience, trying to articulate how I felt, I think of my 14 year old daughter and realize that if I had thought of her in that studio I likely would not have been able to recite the words written on the script taunting me from the lectern. It makes me pause and shudder as I write these words. It is so easy to ignore the burdens borne by others. Easy to remain ignorant, sometimes even willfully blind, to issues that do not directly affect you.

This was illustrated to me earlier today when I watched a TED by Michael Kimmel titled “Why Gender Equality is Good for Everyone“. In his talk, he told a story that hammered home the point that “Privilege is invisible to those who have it.”

As I sat listening to the other men record those catcalls and throughout my time at the mic I realized that this is exactly what he was talking about. As a straight, white, male I am not routinely subjected to having sexual profanities hurled in my direction. With respect to this issue specifically, I was invisible to my privilege.

Today I had been given the magic goggles I needed to identify and see clearly my advantage.

This exercise finished a little over an hour ago now and I wanted to make sure I captured the feeling while it was fresh. The exhibit itself is intended to allow men to understand what it feels like to be a woman in today’s patriarchal society. What I did not expect it to do for me as a voice actor was to force me to acknowledge, not only that men like this existed, but to feel the level of disdain that these men must have for the opposite sex. I was in a warm studio on a cold snowy night well after hours accompanied by four other men, one woman actor, and the female producer. This should not be a difficult exercise since it was all for a good cause.

One of my core values is Empathy. Today I had been given a lesson in spades on empathy. Today I was taught that THIS IS WHAT IT FEELS LIKE. Will you commit to taking the time to see the exhibit? Will you take the time out of your privileged schedule to see what it feels like?

Tell me one thing you can do differently today to help combat this issue?

I have always said (maybe you have even heard me say it) every man should have a daughter… to try to see the world a bit different than before. The problem is that that you can not replicate the fear that she will face when a few names turn vulgar. Or when she declines a date from a stranger and he gets angry. Or when a client hands her a graphic note.

Most of us can handle the names, perhaps become used to it…but you never get used to the fear.

Thank you Mike, as always, to opening eyes and minds to a topic that is rarely taken serious.