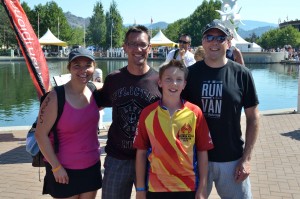 Well, I have always loved the thought of triathlon – would rather do 3 sports instead of just focusing on one.  In fact, I had the privilege of volunteering at the Ironman world championships in Kona Hawaii in 1997 when I was there with YWAM.  That was the first time I experienced the race and saw some amazing achievements which included me walking the last few miles with a 67 and a 73 year old to make sure they finished (and didn’t faint between water stations) before the midnight deadline.  And they finished with about 30 mins to spare.  At the time I thought iron distance was too much and wouldn’t be something I could do, but this definitely sparked my interest.

Over the past 15 years I have done a few sprint triathlons but my fitness has fluctuated and it was never anything I did too seriously.  However, in the last 2 years or so a couple things changed. One, I started to enjoy running more (something I used to hate) and began training for half marathons with some colleagues from work.  Two, my brother Darryl wanted to get back in shape and to do some triathlons again.  I jumped at the chance of doing sprint triathlons again and we did 4 of them last year, actually in two of them Darryl did the Olympic distance.  It has been such a great way to motivate myself to get into shape, a great challenge and a fun thing to share with my brother.  I have really enjoyed talking to people at races as everyone is so encouraging and just want you to do your best.  Most people seem to compete against themselves instead of others.

In August 2011 I went to watch Ironman Penticton as my cousin Lynn was going to do the race.  Lynn impressed me so much as she completed her goal and before deciding to do ironman she had only done a short race.  I couldn’t believe she did it and not only did she complete it, she loved the whole experience.  However, my plan for this coming year was to move up to the Olympic distance or possibly even half iron distance but I wanted to progress my distance slowly.  Then, Darryl started talking about doing iron distance in 2013 and I thought if I’m ever going to do it, this may be the best time.  Afterall, I’m in my late thirties, single and have the time.  So, Darryl and I decided to volunteer and watch the 2012 race and then would decide whether or not we would sign up.  Darryl was pretty sure he was going to.   Most of me was saying, you are crazy to even consider it, but part of me really wanted to do it.

On Sat Aug 25, 2012, Darryl and I volunteered at the bike check of Ironman Penticton.  It was so amazing to see all the athletes as they were getting ready for the big race.  Many of them were very chatty and everyone I talked to were excited about the race and didn’t regret all the training they put in the previous year.  Surprisingly, several of the athletes had not done many long distances races before, in fact  one of my fellow volunteers told me his first ever triathlon was iron distance.  On Sunday Aug 26th we watched the race.  From the pros completing it in under 9 hours to age groupers finishing within 17 hours.  And yes, who couldn’t be inspired by an 82 year old woman, sister Madonna.  If she could do it, couldn’t I?

So on August 27th, 2012 I found myself in line with Darryl and his friends.  Even while sitting in line, I wouldn’t commit to signing up.  I asked people whether I was crazy to even consider it.  They said no, but of course I was in line with a bunch of people signing up for the race!  I decided if Lynn, Sister Madonna and so many other people could do it, so could I.  Of course there was also a part of me that figured Challenge Penticton has a good refund policy, so I could get out of it if needed.  But, then my brother Mike also decided to sign up and I thought, oh I guess this is serious.  Who would have thought that any one of us siblings would sign up for an iron distance race never mind all 3 of us?  What an amazing thing to share with my brothers.

So, if I’m going to do this, I’m going to do it right.  This past week was the first week of training with a coach.  I really look forward to, and dread, the coming year.  This will be an adventure like no other and I know that the road to Challenge Penticton is as or more important than the race itself.  It will definitely challenge me both physically and mentally but I know with proper guidance I can do it and there is nothing better than doing the race with Mike and Darryl.  I anticipate being able to complete this challenge, but regardless of the result I know this year will teach me a lot about myself and what I am capable of.

Awesome! You are capable of so much 🙂 Btw what made you enjoy running more? I’m still workin on that.