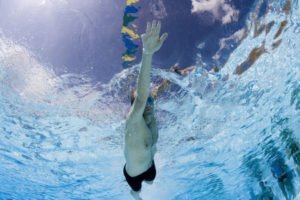 im.  I was referred to a local fitness trainer/triathlon coach whom I contacted in September.  His suggestion was to sign up for some group sessions for any of the three disciplines. After hanging up the phone I immediately went to his web site to see what kind of group sessions he had coming up. They had a group swim class scheduled once a week starting at the end of September. Perfect! The cost was reasonable and a group class was a perfect opportunity to meet others in the sport. I signed up online and eagerly awaited September 26.

At the first session I was pleased to see it was a small group. I believe there were five in total.  It also became very evident that I was by far the least experienced and was very far behind the others. Fortunately there were two coaches Craig and Laura. Craig was gracious enough to spend a fair bit of time with me watching my stroke mechanics (or lack thereof) and made many suggestions for improvements. Craig Introduced me to some of their philosophy on tri specific swim coaching, as well as some of the tools I would use in the pool as I worked my way to becoming a swimmer.  The first tools was a pull buoy. A pull buoy is a small flotation device you put between your knees to assist you with buoyancy of your legs. It is designed to take your legs out of the mix in your swim training. This allows you to focus on your arm technique and isolate your shoulder muscles.  The second tool we use are ‘paddles’.  These are hand paddles that effictively add resistance to your arm stroke.  This has the effect of adding strength conditioning to the specific shoulder muscles used for swimming.  Think of it as a swim specific weight training.

I have to admit I was a little nervous when I first started training for the 300 m in my try-a-tri. Back in July I couldn’t swim 50 m without switching to breaststroke or flipping over onto my back. I obviously completed the 300m required for that race and I was able to do it entirely using a freestyle stroke. Now we are adding tools to my workout?! Oiy!

So for the first four or five weeks Craig had me adjusting my mechanics almost every length. It was like adjusting your golf swing.  There are so many parts and you have to remember to do them all.  Craig used the analogy of the
karate kid.. “wax on, wax off”. You just need to keep repeating the movements over and over and over until it becomes natural and you don’t have to consciously think of them anymore.  As we progressed I made sure I added a least one or two additional swim days a week to my routine so I could practice what I had learned with Craig.  The great thing about starting from “I can’t swim!”, is that you see results quickly! improvement from week to week was vast and it was very encouraging.

My favorite lesson was the first one Where Craig did not give me any tips on stroke mechanics and simply let me focus on the workout that he had provided. Yay!  I’m getting there! It’s so nice to see all the work starting to pay off. Over the x number of weeks in that group session we’ve added speed specific training, endurance and strength training, and a number of different drills. The 3.8 KM swim is what had me the most concerned with the August Challenge Penticton race. I’m happy to report that I’m now to a point where I’m doing total distances in my swim workouts of between 2.2 km and 2.7 km.  I’m able to complete these in between an hour and an hour ten minutes. This is a huge huge stretch from where I was just five short months ago when I could barely swim 50 m without some form of break.

it’s absolutely amazing to see the progress.  It just goes to show that with the right plan, careful execution, and a little discipline you can you do just about anything. Now don’t get me wrong.  I recognizes there is still a long way to go however I am definitely feeling like this is very achievable.  In fact, the swim will likely be the least challenging leg of the race.

Share When it comes to technology the question often becomes how much is too much? When does technology stop making you more efficient and start…