So today I had my first experience with an organized group ride. I have to admit when my friend invited me out for this 65KM ride I was more than a little nervous. My previous longest distance on a bike was somewhere shy of 40KM so going with a group of people I did not know on a ride of this distance certainly had me on edge. After all, I have a fancy new bike and some new riding gear so the thought of showing up ‘looking’ like a cyclist and not actually performing like one made me a little hesitant.

Well you could not have asked for a better day in September to have a ride like this. The sun was shining and a predicted high of 25 degrees!!  The plan was to meet at my friends for 9am and drive out to the Ardrossan Rec center to meet the other riders. A quick coffee at her place, a review of the required equipment checklist and in the truck we climb. Once more through the checklist…. Bikes, Helmets Shoes, Phones, Food… good to go. Fire up the truck, the fuel light starts blinking…. 35KM to empty. No problem we’re only 10 – 15km’s away she says. I reply with “and heck we always have the bikes if we run out”.  I think it was about this point where she started telling me how her friends have diagnosed her with CRS disease. Don’t worry, it’s not too serious, CRS stands for Can’t Remember Squat (clean version). So at this point she also realizes that she has forgotten her phone at home. Back we go. Down to 30KM to empty. We get to the house and the phone is not in the garage where she thought she left it. Hmmmmm….. this could be an issue. Fortunately the ringer was on and calling from my phone revealed her phone under a pile of stuff in the garage. And we’re off again, if nothing else certainly an entertaining start to the morning. The sun is shining we’re off for a ride for a cause, how could you not be having fun with all the antics!! Did I mention that we don’t exactly know where the ride starts? Fortunately there was a guy in front of us with what looked like a wheel in the back of his vehicle so we did what any rational human being would do. We followed him. Guess what? He was headed to the same place!! Phew! 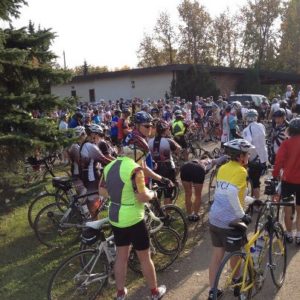 So we hit the parking lot, unload the bikes, head in to register and find the rest of the friends we will be riding with, head over to where they are getting started and are ready to ride. This is where it I am starting to get excited. Never done a group ride before so really looking forward to it. Off we head and I have no idea what to expect or how to pace myself. We are at the back of the pack as we had to wait for one of the group members who took a late pee break. The competitor in me really doesn’t like this and I want to push forward but figure I am best to stay with my group who actually know how to pace themselves. Fortunately the group I am with are also fairly competitive so we don’t last long at the back of the pack. I have to admit the feeling of passing people is a good one ;0) I know, I know it is just about having fun and not really a competition. Didn’t make it any less fun to pass though :0)

The part I enjoyed most was the socializing. For the most part it was a fairly easy ride and no one was really pushing themselves. We are on the country roads and rode either 2 or 3 abreast. It is much easier to chat on a bike than when running I found. There was a group of about 6 or so of us that were riding together and we would pop back and forth and pair up with different riders frequently making it easy to visit and get to know a variety of people. I think I was more social on this group ride than I have been at many networking functions! We had a great group of individuals and it was a pleasure getting to know each of them.

Well we hit the end of the ride and mission accomplished. I completed it without completely tanking. I could still walk and actually felt as if I could do more.  Who knew group cycling would be so much fun. We wrapped up the morning with a fantastic pasta lunch at the Seniors Center sitting out on the grass eating and socializing.  Thanks to all who made this such a fantastic day and I will certainly be back for more next year!!