About a month ago I was asked to come do a presentation at a lunch and learn in a fairly casual setting. I discussed a few subjects with the organizer and we settled on what I would entitle “Relationship based selling in a digital world”.  My thought was I would do a sales presentation that was somewhat counter to what I thought the whole social media movement was about.  I thought I would focus on the fact that in order to create relationships you needed to actually talk to people.

During the my time preparing and researching for my presentation, I have to tell you my views changes dramatically.  I started to see the value and the power that social media presents to us if harnessed properly. The following story is just one of the examples that I encountered while doing my research. Hopefully this will help demonstrate to you the power and opportunity that this new medium presents. 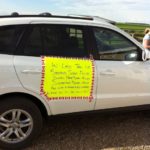 One of our Mortgage Associates, Scott had purchased a Hyundai Sante Fe about a year ago. Over the course of less than 1 year he ran into all kinds of trouble with the vehicle.  Almost all of the major mechanical systems failed. The steering system, the suspension, the 4 wheel drive system. While the dealership repaired all of the issues as they arose it got to a point where Scott just did not feel safe driving the vehicle anymore.

After returning to the dealership to try and get some satisfaction, perhaps they would take the vehicle on a trade, Scott was treated very poorly and no resolution was offered. Scott then decided to take things into is own hands. He went out and purchased a big yellow posterboard in which he wrote about all the issues he had had with the vehicle.  He then proceeded to tape it to the side of the Hyundai as he drove around Calgary.  Scott decided to take his message on step further.  He took a photo of the vehicle with the posterboard on it and made it his facebook profile picture.  He accompanied the picture with the caption below:

“Our Santa Fe is almost celebrating it’s first birthday!! So far, it has had various pieces break or fall off… And while I think that on the whole the make is a good one, when the steering system goes and they need to replace everything, then the 4 wheel drive, and most recently a spring broke and came off, to which the service manager explained ” the last time we saw something like this it took out the tire, and the vehicle rolled. That guy was lucky to make it out alive”. Hyundai Canada doesn’t understand why I won’t put my children back in this vehicle. In fact, you would think that the dealership might want to take it on trade as I said that I don’t have a problem in general, but that I no longer have any confidence with THIS car. Nope! The GM just gathered 6 male employees to accompany him to come and talk to me after half a dozen voicemails and emails weren’t returned. Then he starts yelling “Hey Mark!” and thinks I’m being rude by ignoring him! WTF???”

I came across this on Facebook as I was doing my research for this presentation and thought, wow, isn’t this an interesting way of sharing a customer experience. I decided I would share this photo with my Facebook “friends” as well to demonstrate the power of social media.

Well it soon became like that old Faberge Organics commercial, you know where she told two friends, and they told two friends and so on, and so on… Only now it is more like and they told 236 friends, and Jason told 323 friends and Gord told 567 friends and so on, and so on.  In a matter of about five minutes I watched Scotts message about his dissatisfaction with Hyundai reach over 3000 people. I actually went and did a friend count of everyone in my network that I saw repost it.

It really demonstrated to me the power of sharing within social media. Social media has absolutely put the power back in the hands of the consumer. No longer is Scotts story confined to those around the water cooler, but now that message can spread instantly like wildfire. We all have to start doing business as if everyone is watching, because with social media, they are.

You can view a video of the presentation I referenced on blip.tv here.

OMG ~ Too funny! So get this…I have literally been flirting with buying the EXACT same vehicle…may have to rethink that! And on a further funny note…I LITERALLY referred to the same Faberge Organics commercial in my last post for Zoocasa (http://blog.zoocasa.com/2011/08/raising-bar-stirring-real-estate-soul.html) but couldn’t remember the name! TOO FUNNY!
Great post Michael – and glad to have you over on our side 😉
Cheers!